Red Rock Canyon is only about 17 miles west of Las Vegas.  The trip was mostly to go cycling in the canyon with a side benefit of getting out of the house and out of Los Angeles.

My biking the Red Rock Canyon Loop didn’t go as well as I planned.  I scouted the route on Sunday after I drove in, and it looked challenging but doable. I changed my mind about 10 times from the time I went to bed to the time I got up and decided that I would try it.  I didn’t feel good during the night. I had muscle aches that I thought were from all my biking. Sometime in the middle of the night I decided to set up my travel humidifier.  It wasn’t enough. But by morning the ride was “do or die.”

I parked my car, psyched myself up, and then set off. It was sunny, the temps were in the low 80s when I started.  I’m not sure what the humidity was.  There was a married couple a little ahead of me, and I followed them for awhile before they eased away.   I was huffing and puffing and wheezing at Mile 2. “I’ve climbed 1000 feet before.  This shouldn’t be so bad.  I can do this. I know I can do this… But it’s like that time I was in… Leadville????

That’s when I decided to change the display on my bike computer, I didn’t need an odometer reading for this ride.  I wanted to know the elevation.  That’s when I almost had an heart attack.  “ARE YOU FUCKING KIDDING ME!?!? MOTHERFUCKER!!!!!”

The climb from the Visitor’s Center to the high point of the road was roughly 1000 feet give or take.  The Visitor Center was evidently  around 3700+ feet elevation. My Bike computer said I was somewhere above 4000 feet.

No wonder my heart was trying to be anywhere but inside my body.  I oozed off the bike and waited a long time to catch my breath.  Then I decided to walk the bike until the next downhill.  That was deceptive since the visible downhills were actually optical illusions of the flats hidden in a lot of steep grade.  I walked the bike to the flats and then rode it when it was flat. I finally reach the summit of the ride which is a little short of mile 5. Then it was a welcome downhill ride for awhile until it hit another steep grade and I walked the bike. From that point on it was mostly downhill.  I tried to stay under 35mph, mainly because that’s the ‘top” top speed limit on the Scenic Drive. They’ve also got 15s, and 25s. And some car got popped, probably for speeding, when I scouted the drive on Sunday. I don’t need a “stupid” ticket.  Especially for speeding on a bike.

Somewhere during the ride I thought I just had the normal biker’s runny nose, but when I got back to my car I realized I probably had a cold. The temp was about 99 (according to my car) by then.

I cooled down and hydrated and then I explored the visitor center. 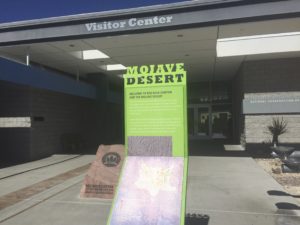 They did a nice job with it. The focus is on education and ecology. They talk about the history of the area both short and long term. There’s a lot of stuff about the plants and animals and  some about the various human uses that range from the prehistory to the contemporary.

I thought they found a nice balance with the gift shop.  I would have liked tackier, but I don’t see that much anymore. No bullwhips, Navaho blankets, or Mexican jumping beans or rattlesnake eggs. No ashtrays or snow globes or hand carved wooden knick knacks that say Red Rock Canyon. It was all very tasteful and sensitive. Stuff grandmothers that teach Sunday School would buy without hesitation for impressionable kids.

In the history books there was an entire section devoted to women pioneers. It was on a high shelf. That’s either a mixed message or a deliberate pitch.

The cold is kicking my butt right now.  I hope this makes sense.

I parked my car, psyched myself up, and then set off. It was sunny, the temps were in the low 80s when I started.  I’m not sure what the humidity was.  There was a married couple a little ahead of me, and I followed them for awhile before they eased away.  At mile 2 I was huffing and puffing and wheezing. “I’ve climbed 1000 feet before.  This shouldn’t be so bad.  I can do this. I know I can do this… But it’s like that time I was in… Leadville????

Scenic Drive is not the full 15 miles of the loop.  Scenic Drive dumps you onto Blue Diamond between miles 12 and 13. You have to take that toward Las Vegas and then turn left into Scenic Drive to get back to the parking lot. If you’ve done your homework you have the parking receipt on you, otherwise they’ll charge you again to get in. I think it’s $3 for  bike instead of the normal $7.

I can imagine that on some days there’s a big crowd and a long line of cars in the area. Scenic Drive is a one way two lane blacktop. There’s a lot of little turnouts, some go to overlooks or hiking trails. Some go to destinations inside the area. But, for the most part, it’s a uphill road for just under 5 miles.

There were no big crowds on Monday. I started out with that couple ahead of me and they eased away and I never saw them again. But around mile .75 a guy passed me on a slick, black, Italian, carbon frame. It was a demoralizing as getting passed on the freeway by a slick, black, insanely priced, Italian car. They’re designed to pass people. Put them in stop and go traffic and they go nuts, but on the open road with no visible cops, the drivers are storing up points so that when they do get popped the already astronomical insurance premiums will be even higher.

Passed on the uphill, by a bike. The guy looked a little chubby. It was going to be one of those days.

At Mile 2 I had my meltdown. 4000 plus feet?  I had never considered that. It’s right there on the elevation profile on the website but I focused on the elevation gain of the ride. I was at a mile marker and I considered lying down using it as a headstone. It would have been a great epitaph.  “RIP, Mile 2” My brother would probably get the joke. But I also realized it would be humiliating.  “He died two miles into the ride.”

I was going to at least get to Mile Marker 4 before I bounced off the planet. Just for appearances. So I started walking the bike uphill.

At Mile 3 thee guy that had passed me at Mile .75 passed me again.  <Oh, Come on!!!> He was going faster this time.  I guess he had to stop at a restroom at the first rest stop.

I made it to Mile Marker 4. There was something that looked _flat_ but it was actually slightly uphill.  I was wheezing again. I dumped water on my head. Took some big swallows. I wasn’t feeling dehydrated. I felt drunk. As Douglas Adams wrote, “‘I felt drunk,’ said the glass of water.” 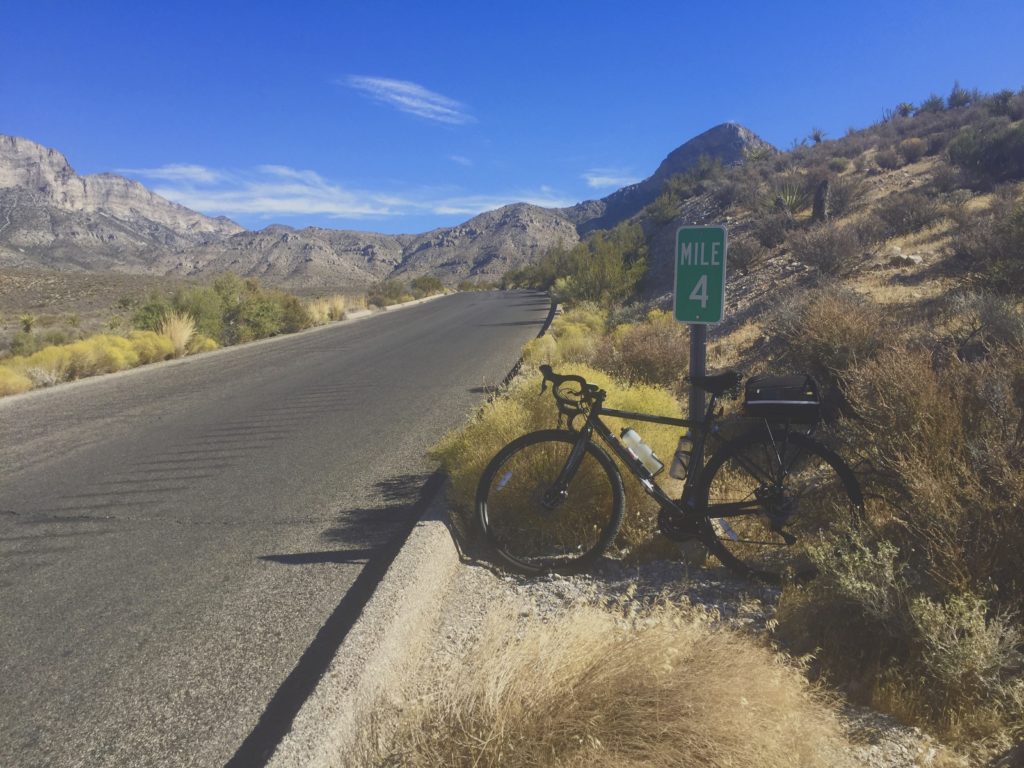 I was still alive, even if “breathing” was a technicality. I started walking again. Only a mile to go before the bliss of some downhill.

That’s when the next guy passed me. He was older, probably in his mid-sixties. He didn’t pass me as quickly as the first guy did, so it gave me a chance to say hello.

“I’m dying,” I said.  I didn’t pay attention to the altitude when I planned this.”

“Yeah, it takes some getting used to. I like your shirt.”

He pulled away, and he vanished around the next bend. Now, the reason I said I hated that guy was because not only was he riding the loop, he rode to the loop. I don’t know his initial starting point but I know he rode to the Drive because I passed him on his bike while I was in my car, a few miles from the entrance to Scenic Drive.  When I’m in my mid sixties I want to be that guy. It’s not looking likely right now, though.

The summit (of the Drive) is just before Mile 5.  I was on my bike by then. And I rolled by confused that it didn’t look the same as it did the evening before. 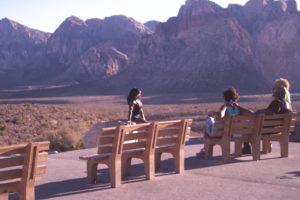 Then there was a nice sweeping downward curve to the left and I think I started breathing again.  I knew I was set until a steep section that was going to come up.  It was steep in the car, and I’d already realized I was probably going to walk it. I got through that and passed a group that was taking a Scooter Tour. I felt pretty good until they blew by me later

Their tour ended at a lot where the Drive meets Blue Diamond. That’s where I passed them again. It helped that they were stopped and off the scooters. Hell, I’ll take whatever little ego boosts I can get. I did not feel well. I was coming to the conclusion it wasn’t a bike rider’s runny nose compounded by allergies.  It was starting to feel like the onset of a cold.

On one of the ride reviews the writer suggests doing the loop one more time because you’re warmed up. Now, that person? That person I think I really hate.